Rita has a culinary adventure at the palace. She even tries camel tongue. What is the most adventurous thing you have ever eaten?

The other night, my friends and I went to the Emirates Palace, in Abu Dhabi. It was a popular, but classy festival: popular because the entrance fee was relatively cheap (we are talking about the Emirates Palace, after all), and classy because all of us were dressed up in clothes that fit the occasion and the palace.

The idea of the evening was that the Emirates Palace introduces residents of the Emirate to all types of food that they serve at the palace, from Lebanese food all the way to Chinese. What’s even cooler is that the chef of each restaurant was present with his sous-chef near the stand where their food was being served, to explain each dish, what it’s made from, how it’s enjoyed by the locals, and on what occasion.

My friends and I stopped at every single station and ate from all of them–we didn’t let any country feel left out. Lebanese, Italian, Chinese, etc. etc. etc. Finally, and before we had dessert, we decided to have Emirati food. At the end of the day, we are in their home country.

We went up to the stand where it was being served and asked the restaurant manager to give us his food recommendation.

He advised that we have the camel tongue. Yep, you heard me, camel tongue. Honestly, there was no way I was going to leave without trying it. I told myself, “When am I ever going to have such an opportunity again?” So the chef and sous-chef started telling us about how good this dish is and how they have been preparing and marinating it in all sorts of spices for the last five hours. I said, “Fine, OK… I’m in!” As soon as they realized that I had already made up my mind, they uncovered the pan; and, in front of me, was a tongue. An actual tongue. Not cut up, not looking a different shape–a tongue, as is. Between you and me, I was terrified, but I wasn’t about to back out.

I hid my shock, I smiled as if everything was OK, and took the plate. On the inside, though, I was completely mortified. I held the fork and cut a big piece to get it over with once and for all. As I brought it near my mouth, I truly felt like I was about to eat someone’s the tongue, because it actually looked like it was a human tongue. I thought about it so much, and the thoughts were fogging up my head. Finally, I decided that I was just gonna eat it. What could possibly happen?

I ate it and it tasted like lamb, but every time I remembered that I was chewing a tongue, I would get very nauseous. It’s really weird how the human brain and the way we think affect everything in our bodies. 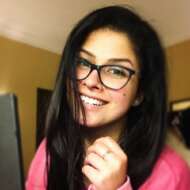 Rita is a political scientist by day, a writer by night. Originally Lebanese, Rita has spent the last 14 years between the United States and the United Arab Emirates, where she currently resides. Rita will be returning to the United States shortly, to pursue her graduate studies in foreign policy. In the meantime, you’ll be hearing/reading about her adventures here on Lingualism.
Learn More