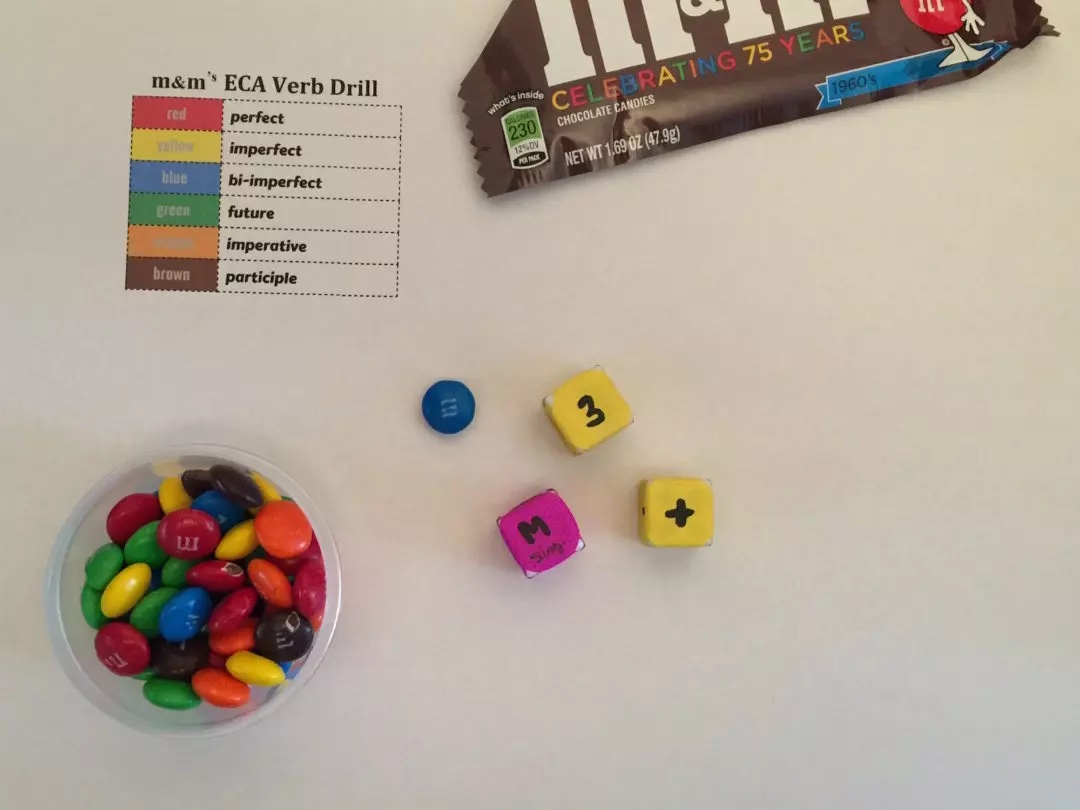 Arabic verb conjugation. Did you heave a sigh as you read those three words? Arabic verbs are arguably the most complicated part of Arabic grammar. Whereas an English verb has five morphological forms (for example, write, writes, wrote, written, writing), an Arabic verb has several dozen. And this is true for both Modern Standard Arabic (MSA) and dialects. In Arabic, a verb is inflected to indicate tense and mood, as well as to agree with its subject in person, number, and often gender. Negative verb forms also require the addition of prefixes and suffixes in many dialects, such as Egyptian Colloquial Arabic (ECA).

Quite a few more than the five forms an English verb can take, right?

You, the Arabic student, are faced with choosing the correct tense, mood, person, number, and gender. You then have to recall the conjugation from memory, or, in most cases, consciously construct the conjugated form using a number of rules you’ve learned in the past. And then you have to get the word to roll off your tongue, a feat in itself!

But all of this takes too much time. We have to stop and think, and this negatively impacts our fluency. Our goal, of course, is to produce the correct form of the verb in a sentence without hesitation. How? One word: Automation. How can automation be achieved? Through the internalization of language patterns. How? Again, one word: Drills.

Many argue that drills are unnatural. After all, native speakers learn without any drilling. But native speakers acquire their mother tongue with one notable advantage: They have had a massive, massive amount of exposure to the language. As someone who is already decades behind adult native speakers in language exposure, you absolutely need focused practice… through drills.

In language learning methodology, drilling has largely been discarded over the past several decades in favor of the communicative approach. Previous to this, methods such as the audio-lingual method, which emphasized drills, were quite popular. But there has to be some sort of happy medium here. Drills have their place in language learning. They really do provide a fantastic means of automating and internalizing language patterns, especially morphological forms, that is, at the ‘word’ level with prefixes and suffixes.

But what are drills?

Okay, so what are ‘drills’ exactly? Drills can have a number of variations, including repetitions, substitutions, and transformations.

To avoid drilling in a set order, we need to add in randomness. We need a random form generator (RFG), which will randomly present one of the dozens of conjugated forms a verb can take. You can make your own RFGs using grids, cards, or dice.

Start by making a list of verbs you want to practice conjugating.

Grids: As you can see in conjugation tables above, any given verb has several dozen forms. Your grid should contain prompts for each form from the table (or be limited to the forms you want to practice). You can easily customize your own grid on a word processor, such as Microsoft Word or Google Docs, by making a table. Here are pre-made tables for MSA and ECA:

Hold a pen or pencil in hand, look away from the grid, and touch down with the pen(cil) tip somewhere randomly on the grid.

Cards: If you make the cells on your table larger, you can cut them into cards, shuffle, and draw a random card to conjugate. Instead of choosing verbs from a list, you can make verb cards. You would then have two stacks of cards: verb cards and RFG cards. Choose one of each and conjugate.

Dice: Dice can be fun, but normally only have six sides. So, you will need three or four to designate a form. Use small stickers to transform standard gaming dice into RFG dice. 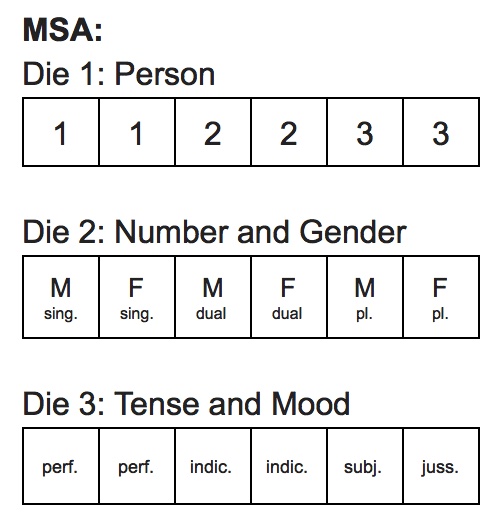 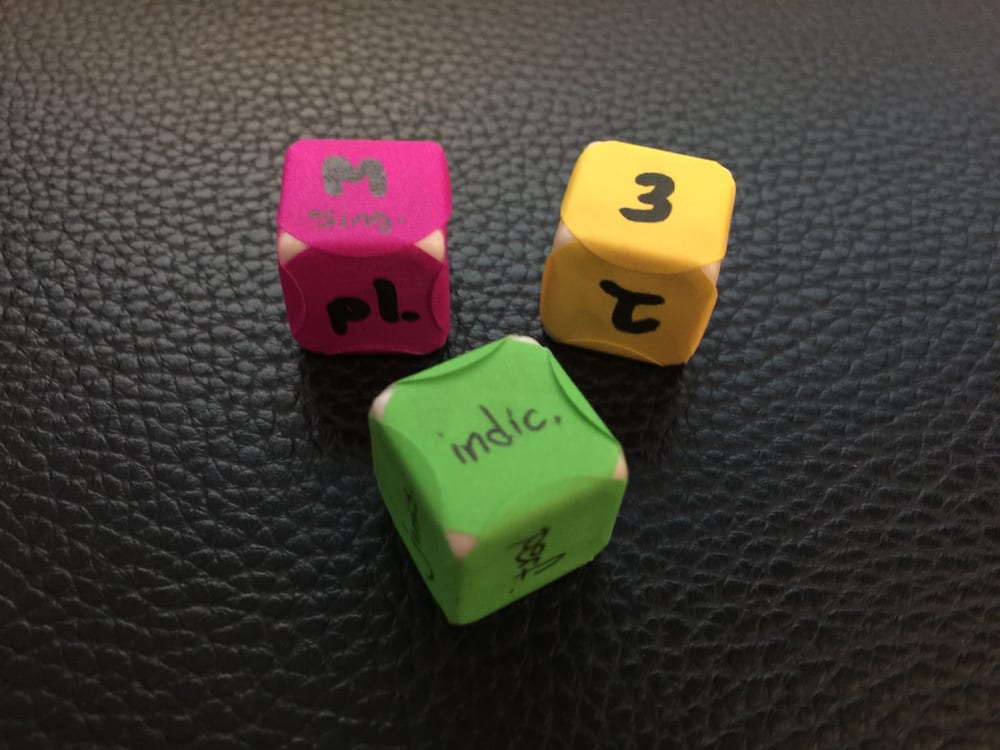 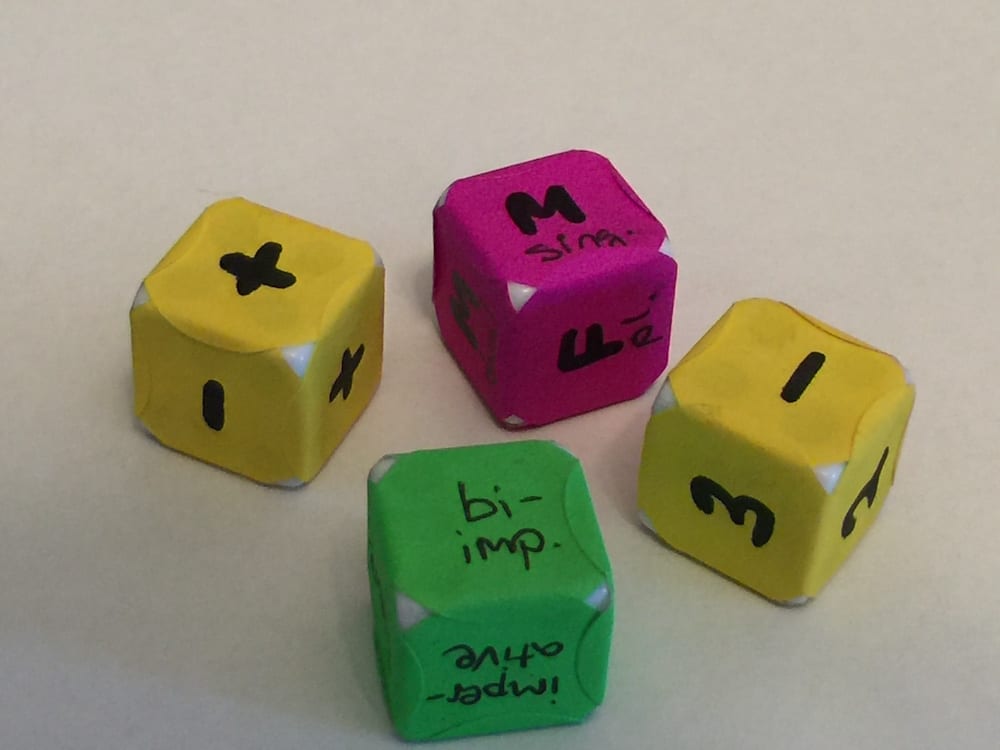 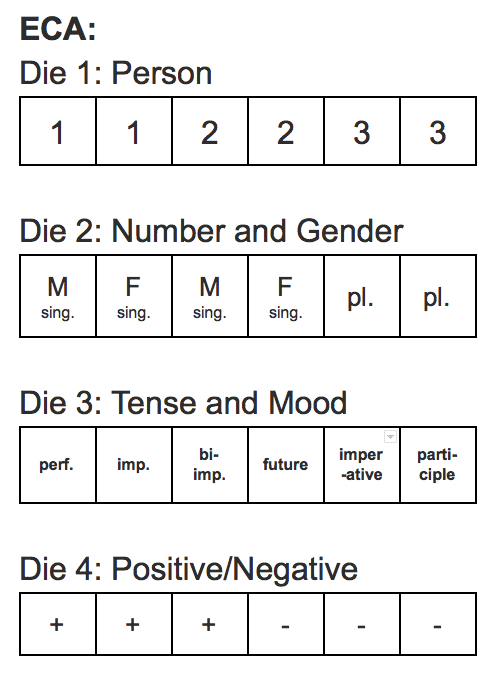 You can also make virtual dice on apps like Make Dice Lite: 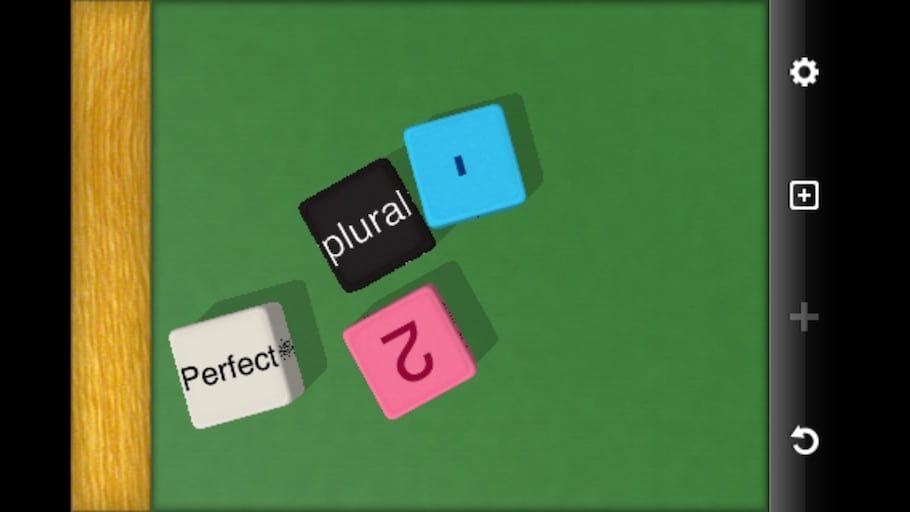 An excellent app for MSA verb conjugation tables and quizzing on conjugated forms is the CJKI Arabic Verb Conjugator:

The next step is to work the verbs into a short sentence. Add a subject, object, or adverb (time, place, etc.) when reciting a conjugation.
So, go ahead and try some verb conjugation drills and see what works best for you. Do you have any tips to share? Did you find any creative ways to gamify the drilling? Please share in a comment below.